What is a FTA?

A FTA or Free Trade Agreement is a policy aimed at promoting the development of international trade by eliminating tariffs, quotas and national regulations which may restrict the import or export of goods and services (Source). It applies only to products manufactured and exported to the countries involved in the agreement. Please note that the goods must travel directly to its final destination WITHOUT transit in order to enjoy benefits of the FTA.

Which countries are involved?

As a complement of the countries cited above, here is the list of those countries involved in the EU-Korea FTA and EFTA-Korea FTA.

The EFTA is composed of Switzerland, Norway, Iceland and Liechtenstein.

With whom has South Korea signed an FTA?

The Republic of Korea has signed FTAs with several countries and regions from all around the world. In 2004, Korea settled an FTA with Chile;in 2006 with Singapore and the EFTA (European Free Trade Association); in 2010 with India; in 2011 with Peru and the European Union (list of the EU's Member States below); and in 2012 with the United States. 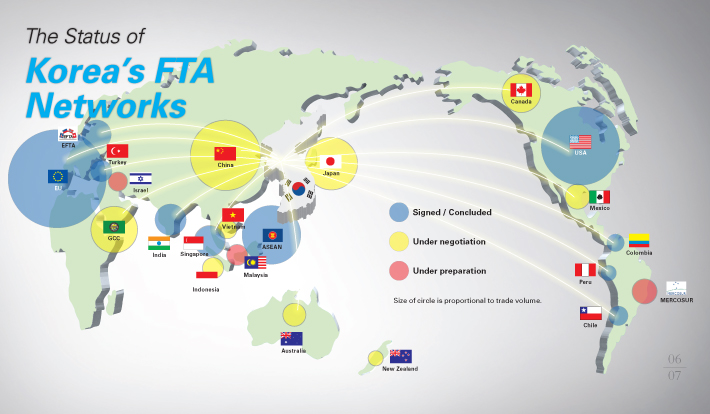 Map of the current FTAs signed with South Korea in 2012