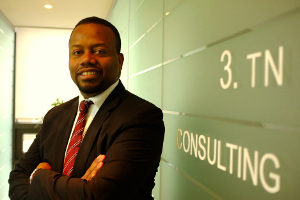 Thierry Nannette is a proven project manager with over 15 years of experience as the driving force behind successful planning and implementation of global technology projects and engagements. He worked for worldwide leaders in electronics and telecommunications such as Samsung Electronics, Nortel Networks and Siemens.

Prior to founding TN Consulting, he was a Trial Coordinator and R&D Project Leader for the Overseas Wimax Project at Samsung Electronics where he demonstrated his ability to develop strategic project plans that ensure seamless execution and quality deliverables when facilitating the bridged cultural and gaps between vendors and customers to foster open communication and secure customer contracts.

In addition, Thierry extensively contributed to support a joint venture between LG and Nortel in his capacity as Project Manager when he was with Nortel Networks.

As an effective communicator who is able to build client relationships, understand customer needs, and bridge cultural gaps to create an open dialogue, he has a track record of securing long-term agreements. He is also dedicated to designing and implementing efficient solutions that solve business and customer problems.

TN Consulting is a Korean Trading and Consulting firm established in 2012 by Thierry Nannette in Seoul, South Korea. The company is composed of a multilingual, qualified, efficient and dynamic team of specialists of the Korean market with an advanced understanding of the global market, and strives to become the liaison to facilitate exchanges between the Korean market and non-Korean (overseas) counterparts.

What do we do?

Based in South Korea, with our firm understanding of Korean and overseas markets, we would like to play a very dynamic role in business relations between South Korea and other countries.

Thus, we endeavor to disseminate Korean expertise and products abroad, and allow Korean products to be available overseas for non-Korean residents. For more details >> Services.

While we remain committed and open to all areas of the world for business, we are initially focusing on the regions that have Free Trade Agreements signed with South Korea, notably the EU and the US, from where a number of our valued customers originate. For more details >> Contact us.

Simplicity: exporting and importing in a few steps.

Satisfaction: a customer relation that lasts.